Republican Revolution - Which One ???

Republican Revolution – Which One ???

My last post dealt with the Republican Revolution of 1994 and how there were similarities to our current state of affairs. I was drawing parallels, hoping 2010 could prove to be similar.

Today I just read a commentary by Michael Barone run by Rasmussen commenting on the last time an unpopular bill was passed in Congress by a slim majority to become law. As Michael Barone points out; this was done in 1854 and was the driving force for the start of, you could say the first revolution that started the Republican Party.

If you remember your history, slavery was what the famed “Lincoln Douglas Debates” were all about. The legislation that fostered the debates was the passage by the legislature of the “Kansas-Nebraska Act” which created the territories of Kansas and Nebraska and in effect allowed an expansion of slavery into more of the “Territories” than had been previously the law under the “Missouri Compromise” which allowed slavery in the territories south of Arkansas and not north of it.

The new “Kansas-Nebraska Act” allowed the two new territories which were north of Arkansas a choice. As in the Civil War to follow, both states rights and slavery were inseparably intertwined.

The Barone article shows that the Republican Party was formed to fight that legislation and in the following election (the first in which there were Republicans) the huge Democrat majority turned into a huge Republican Majority.

How amazing is that? A brand new party runs a Republican Candidate for President and candidates in all the states and wins not only the Presidency but the control of the US House by a huge margin.

I guess campaigns were easier back then. Lol

Below is a map of the USofA back in 1854. The Grey area was the slave states, the Red was the Free States and the Green were the previous Territories, while Kansas and Nebraska are in White. 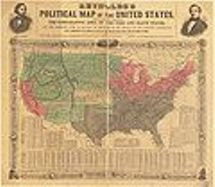 As I’m always looking for methodologies in the past to point to a Republican Resurgence I feel remiss for missing the very first Republican Revolution which was truly a grassroots movement founded on Principled Action against an unpopular law pushed through the Congress by the majority with corruption and paybacks as its means of passage.

One word on “Principled Action”. People have some principle upon which they hang their vote on issues. Slavery was one of those principles. Sure there were all sorts of other issues like states rights and the whole money thing.

As with issues today, there was no lack of funding for either side in the slavery issue. The Opening of the West and the idea of America as a Ocean to Ocean Nation was at stake. The decision of building a transcontinental railroad and from whence it would start ie Chicago, New Orleans etc was the funding mechanism for both sides. But what trumped the “Special Interests” was the principled outrage of the American people.

That is where Americans drew the line on the map. The government has no right to decide which people have freedom. They are there at our request to make sure all people keep hold of our inalienable rights. That is where we stood up and said that we would not hold for corruption when it causes us to lose our freedoms. That when you take away freedom for some you leave us all open to tyranny. Play all you want in Washington, but leave us alone. 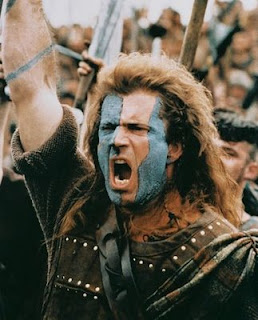 Regards, Live Dangerously Be A Conservative
Posted by live dangerously at 10:32 AM No comments: Links to this post

The Times They Are A Changing

The Times They Are A Changing

This is new, but the story is as old as the hills.

Freshman Congressman Parker Griffith has announced he is changing from the Democrat to the Republican Party. See link to Politico video below. (edit-the video wouldn't play. So the link is to the article where the video is. click it and then the video-end edit)

That a politician would switch sides is not new by any means and by itself would not mean a lot. This was done on principle and that is different. This was done when outside forces were needed to keep the ball rolling. Parker Griffith had been wrestling with his conscience for awhile over his votes for the Liberal agenda pushed by Speaker Pelosi and voted against her to be Speaker again.

The ball we need to keep rolling that I mentioned was the momentum we picked up from the Tea Party thing to the gubernatorial elections in New Jersey and Virginia and a special election in the state senate of Michigan.

Things like this did happen before, and though seemingly random when put together they were the start of something that had a life of its own.

Later he says there is no room in the Democrat party for basically 2/3rds of the American people.

Listen to it and see how I came up with that one.

I got a bumper sticker in the mail a couple months ago that read. “Stop Pelosi” then under it read, “ www.BoehnerForSpeaker.com ”. People thought I was nuts. I really don’t know how possible that is for 2010 but this unexpected flip of a seat brings Boehner one seat closer. Will other Blue Dogs out there do the same? As the article below from which I lifted the video makes clear, Pelosi and crew were in a panic calling up other blue dogs to stop any possible revolt. All I can say is 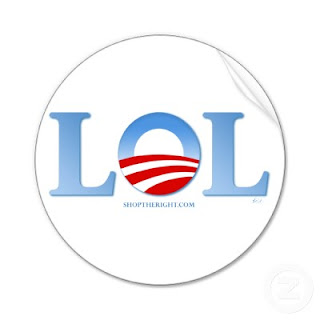 Then I remember Peter Wallsten wrote for the Wall Street Journal that there were some retirements coming up in the Democrat party in competitive districts, and made the case that these Congressmen aren’t running again due to an increased threat to their chances because of President Obama and Speaker Pelosi pushing an unpopular and as Congressman Griffith would say a far left agenda.

The article does point out that there are as of Dec 15th, 13 Republicans retiring and 11 Democrats. The trend as he points out however has been for the Dems to retire recently, 4 of whom announced within a few weeks. (I would think Obama’s drastic fall in the polls recently had a big influence). Also 4 others were mentioned as possible.

The magic # is 218 for control of the House, that is a pick up of 41 seats. All would agree a Herculean task indeed. But it was done before as the chart tells us.

What history tells us also is that it took a perfect storm of a couple dozen Dems retiring, plus a voting public upset with the failed promises of Liberal Democrats along with the encroachment on their individual freedoms by an overreaching governmental bureaucracy came together under the brilliant leadership of Congressman Newt Gingrich and his “Contract with America”.

What we have this time is everything but Newt and the Contract with America. Will the Tea Party movement galvanize and collect enough of the angst out there, are they a force that can build a coalition as Newt did? Most would say no. I say wait.

Wait and see how they grow and spread out and broaden out. If they don’t they will die off.

The other thing would be for a person to step up to take the mantle of leader. Is Minority Leader Boehner up to it. Perhaps not like a Gingrich but perhaps in other ways. There still needs a face to be put on this whole thing to make it personal to the voters. Where will that come from.

Perhaps the Tea Party is the way it will come about. Perhaps not.

I will keep hoping for the right leader but we and I need to keep working as we have been to keep the ground fertile for the seeds to grow.

The real revolution to be lasting needs to come from the State Legislatures as well as from the Fed. It will keep growing if we keep putting our sweat and tears into it.

That will be my sacrifice to make this dream into a reality.

Regards, Live Dangerously Be A Conservative
Posted by live dangerously at 2:38 PM No comments: Links to this post