The Heart of a Conservative

The Heart of a Conservative

What do Victor Frankl and Newt Gingrich have in common? Seemingly not much but if you study their works you will find they do share a basic belief in the individual vs. the collective.

Frankl who was a survivor of a concentration camp in WWII started up a new school of psychology (Logotherapy) founded on what he learned from the camp experiences. It is based upon “Man’s Search for Meaning”; which is the title of his book. Here is a quote from that book.

-----quote-----
“I consider it a dangerous misconception of mental hygiene to assume that what man needs in the first place is equilibrium, or as it is called in biology, homeostasis. What man actually needs in not a tensionless state but rather the striving and struggling for a worthwhile goal, a freely chosen task.”

In an article in Reason Grover Norquist quotes Newt Gingrich.

-----quote-----
There will be conflicts, and this is where Gingrich's observation is so critical. The majority governing party does not eliminate conflict, doesn’t resolve conflict. We agree to manage conflict.
-----------------

Victor Frankl would agree with Grover and Newt that managing conflict is the job of all.


Frankl’s logotherapy’s school is based on the notion that each individual has a meaning and the best a psychologist can do is to manage the individual’s path in finding that meaning and fulfilling it to the best of their ability. Further the struggle itself is the therapy in which an individual becomes whole.

Frankl, Grover and Newt again I think will agree on Frankl’s next quote.

-----quote-----
“Each man is questioned by life; and he can only answer to life by answering for his own life; to life he can only respond by being responsible. Thus, logotherapy sees in responsibleness the very essence of human existence.”
------------------

I highly recommend Frankl’s book “Man’s Search for Meaning” as it is a double edged sword. First it is a firsthand account of the concentration camp experience. Second it flushes out a very conservative message. That message is that man has a meaning to his life. Life is talking to him and it is the individual’s responsibility to listen and act upon what he hears. Individual man’s happiness is rooted in how well he handles his problems not the number of problems.

Thomas Sowell’s classic work, “Conflict of Visions” goes also to the heart of a conservative as it explains the two basic visions of man. One Vision (Conservative) is that man is not perfect and conflict and inequalities are and always will be with us; therefore it is up to the individual to decide which way they will go in life according to their own lights. The other Vision (Liberal) is that man was born perfect and only corrupted by their society or circumstances and that if we change society and make it perfect, man will again become perfect and happy.

Frankl seems to say along with Newt that the first Vision is the correct one. Namely that we get our meaning in life by how we manage our tensions or conflicts which determines our state of happiness.

We have had plenty of efforts at making a perfect society that tries to create a tensionless homeostatic individual throughout history. None has worked. Our unique American Experiment in putting a premium on Individual freedom has worked for a few hundred years. Combined with the complimentary tool of “Free Markets” Individual exceptionalism has been rewarded and all the people in the American ship have floated higher and sailed more secure upon the troubled waters than the rest of the world.

This ideal of individual freedom is being challenged at its core by the socialistic manifestations of the liberal administration. The attack on the Free Market system is an attack on the one way individuals have of making themselves and their families better.

Will we as individuals get further ahead by going on welfare and letting the government take care of our problems for us; or will we be further ahead by seeking our life’s meaning by defining our own problems and how we will react to the tensions and conflict that arise?

The heart of a conservative is warmed through the use of their freedoms. There is a certain sense of fulfillment in actually using freedom, a sense of well being. The real control over one’s own life is what that often quoted phrase “The Pursuit of Happiness” is all about.

Regards, Live Dangerously Be A Conservative
Posted by live dangerously at 8:27 AM No comments: Links to this post 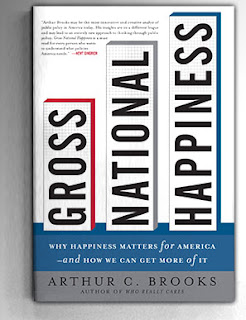 I have been reading for the second time “Gross National Happiness” by Arthur C. Brooks. I first read it before anybody heard of Obama and wealth redistribution was just a glimmer in Hillary’s eye. The first time I read it, I ended up skimming thru it. Arthur Brooks filled the book with scores of ideas all based on a myriad of surveys; and unless truly motivated (which I wasn’t) seemed like overkill.

This time however after the election and the advent of projected exponential expansion of government and deficits, the facts and ideas of Mr. Brooks started to make sense.

Keep in mind as you read this also that the loss of individual freedom we are facing will lower our constitutional right to pursue our happiness. As the title suggests, the book is all about that constitutional right; “the Pursuit of Happiness”. While everybody seems to know what makes them happy, Mr. Brooks seems to have gathered all the source material on happiness ever published and studied them. The conclusions he draws are all based upon looking at public policy through the lens of making people happy. He came up with the term “Gross National Happiness” as a way to measure our happiness. Much as we use Gross National Product to measure money.

The first part of the book deals with defining happiness and he does that by looking at the results of a lot of various surveys and tests performed over the years and then he goes further by trying to find what groups of people seem happier and why.
What I really found interesting along with the author were some of the conclusions which seemed counter intuitive.

One overriding phrase I picked up on in regards to Wealth Redistribution was; “association-causation fallacy”. What this meant was that something associated with something may not be the cause. Take the example he uses. Height of children is associated with intelligence in developing countries. The height however is not the cause of intelligence it is merely the result of better nutrition; it is the nutrition which causes both increased height and intelligence.

He applies that “association-causation Fallacy” idea to happiness not being increased by not working or the amount of money you get.

Brook’s book is replete with this kind of myth breaking research. All is footnoted and sources are listed in the back. Also he honestly seems to not twist the facts to his benefit. He continually gives both sides and when possible corrects the survey results for age, wealth, and all the other possible variables. He seems obsessed with the idea of comparing apples to apples. I might add it is refreshing to see that, as compared to the slanted stuff from both sides I see every day that is supposed to pass as unbiased facts.

The book also exposes the myth that work is unpleasant vs. no work. Study after study show how work is a necessary aspect of our lives, without which we cannot be happy. I truly enjoy how he takes that apart and tries to get at the “cause” again, and not the simple association fallacy.

What I’m carrying away from the second reading is the importance to happiness of personal freedom. This Freedom is seen not so much in what we do, but as to whether we chose to do it ourselves or are told to do it. Brooks states facts and figures to prove out the idea that when people stop what he calls, “creating value” they become less happy and start to become miserable. This leads to the idea that the Nanny state takes the creative control out of the people’s hands, while providing for their sustenance actually makes the people depressed. Dave Ramsey the radio financial guru who is “Hell on Credit Cards” has a saying. “The borrower is slave to the lender”. I think Arthur and Dave are on the same page as far as the idea that what you lose by accepting someone else’s help can be more costly than doing it yourself.

He explains things like “Income Mobility”. He states that the amount of “Income Mobility” is the prime indicator to measure the happiness of people or a society. The idea that a person can start out at the bottom and work to get to the top is an empowering and motivating force that gives people happiness.

I know I’m rambling but the book is that good and deserves a thoughtful read.
His other book, “Who Really Cares” is also well worth a read.

My best compliment would be to say that I look at Capitalism and Wealth Redistribution in a basically different way after reading Arthur C. Brooks’ book. “Gross National Happiness”. In fact the more I think about it, I will look at other things with a different perspective after reading his book.

It is my assumption that this books helps prove that we as conservatives have a basis in law to repeal the Nanny State regulations legislated upon us. All law must have their basis in the Constitution, and while Mr. Brooks doesn’t make that connection directly, he leads us toward that seemingly obvious conclusion. This book is also chuck full of useful anecdotes to help make our case against this “Nanny State” takeover of our Freedoms. This book will help me talk Conservateeze better to my friends and neighbors.

Regards, Live Dangerously Be A Conservative
Posted by live dangerously at 10:53 AM No comments: Links to this post